Home>We are pilgrims on the journey!

We are pilgrims on the journey!

The Road did Rise to Meet Me 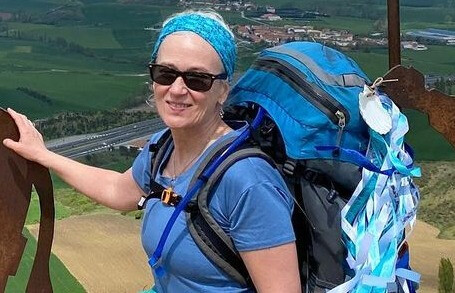 An update from Jennifer's Instagram account on Thursday, April 28:
Finished 100 miles. Left Navarre and entered La Rioja. The the road did rise to meet me. The wind was mostly at my back. The sun shone warmly on my face twice. The rain has fallen gently on the fields and everywhere I’ve been. God must be holding me in the palm of God’s hand.
Posted by The Reverend Jennifer Pedrick with
May 4, 2022

The Camino on the Big Screen

The Way with Martin Sheen (2010) tells the story of Tom Avery who is notified that his son Daniel has died in a storm on his first day of pilgrimage on the Camino de Santiago. Tom goes to St. Jean Pied de Port, France, to bring Daniel’s body home but decides to have him cremated so that he may carry Daniel’s ashes and complete his pilgrimage for him.
I think it is a good story and well done. But an important thing for me watching the movie and thinking of Jennifer’s pilgrimage was that the entire film was made on the actual Camino de Santiago and that most of the scenes were out on the Camino. There were occasional brief scenes in hostels and restaurants, but by far the greatest amount of footage was of Tom and three fellow pilgrims out on the Camino and finally arriving at the Cathedral de Santiago in Spain. It was wonderful to see the scenery that pilgrims experience as well as to get a sense of the different kinds of terrain and paths that the pilgrims walk. They travel on paved areas in towns, narrow grass and dirt paths, paths between the rows of plants on a farm, to steep rocky mountainous areas.
Three cheers and lots of prayers for Jennifer and all the pilgrims traveling with her!
Mary Weyhing
The Way is available for streaming on Amazon Prime as well as on DVD or Blu-ray from your local library.
Posted by Mary Weyhing with

We are pilgrims on the journey! Feed

During Eastertide, our Rector, The Rev. Jennifer Pedrick, will be on a pilgrimage on the Camino de Santiago.  While Jennifer is on her real pilgrimage, members of the parish also will be walking the Camino virtually.  Keep up-to-date with Jennifer's progress and the parish's.